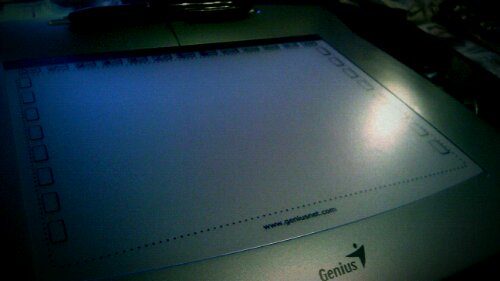 Greetings! It’s been a while but with good reason. With the holidays, I’ve been a bit all over the place. One thing that’s been taking quite a bit of mine time happens to be the Genius MousePen 8×6 that I mentioned before! It’s definitely been a learning experience, but I love it. I’m trying to get used to the software I’m using to draw in, as well as the learning curve for the peripheral itself. That being said, the MousePen has been really easy to get acquainted with. I really couldn’t have ask for a more fun, special gift.

CR-48? Sadly, I have not received one. I’m pretty much ready to say this opportunity is in others’ hands. If you’ve been lucky enough to be selected for Google’s dabble in netbook OS with ChromeOS, let me know what you think! Wired gave CR-48 a “5” rating, which means it is “recommended with reservations” according to their quick rubric o’ratings. (Full article from them in the link.)

A friend of mine and his co-workers/fellow-grad-students have gotten on a Do-It-Yourself kick lately. Namely, they’ve worked very hard on a few submissions to a website called Instructables, which aims to provide users step-by-step guides on how to make interesting, useful or otherwise weird projects come to life. Two of the projects include making your own steampunk-esque potion bottles as well as making a legitimate, functioning third-person view rig! The latter has actually gotten some fairly heavy steam on the intertubes, hitting Gizmodo, Engadget and several other popular tech blogs and sites! (Not to mention my friend’s YouTube channel blowing up so rapidly that he is now receiving emails from YouTube asking him to setup AdSense and put adverts across the channel for profit!) I’ve included links to fly you all around regarding those projects, but keep in mind that they’ve submitted these for a reason! Instructables has a contest (sponsored by Craftsman) going on. Voting is over, however I’m sure they would love some positive comment love! Registering to comment on Instructables is easy and free, so give those guys some feedback! They worked pretty hard on those how-to guides. Also, if you decide to check out the Gizmodo/Engadget posts, keep in mind that the video featured on those blog posts was chosen by the author of those particular sites. That being said, they picked essentially the most boring videos of the lot. If you want to see how the third-person feed actually looks, check out the YouTube channel link or the Instructables site link. Enjoy!

Ready to get a chuckle? Here’s a sketch I worked on earlier while I was truly showing off my nerd-dom. (I was watching a web comic artist that I’m a fan of broadcast a live D&D session he was in while I had Fellowship of the Ring on the TV as ambiance. Yeah. Geek cred.) Mainly, I was trying to get down the concept of sketching on one layer, then moving to a solid outline layer and then moving to a colour layer. Of course, there are more than just those three, but that was the drive behind the project originally. Feedback is always welcome, but I’m mainly just kicking around my new toy and figured I’d post something from it! 😀 Anyway, nice to post again after mini-vacation! Feel free to “Like,” comment and share!

Want to be able to track your CR-48 shipment? I was recently messing around in my WordPress dashboard, and I noticed that statistically “check status cr-48” was getting the most hits for my blog and was leading people to my “CR-48 Status: Pending Approval” post! (To those that don’t know, CR-48 is the project codename for Google’s beta ChromeOS netbook.) It was pretty interesting to search the Mighty Goog and see my little space there, but then I realized something. I’m letting people down! Someone out there is trying to find their CR-48 laptop status, they’re finding my blog and they’re being disappointed when it doesn’t lead them the right way! Well, not anymore! If you want to track CR-48 shipments, you’re in luck! Although Google wants their selections to be a surprise, there was a nifty web-app created by and hosted by Addicted-Gamer. You can find the web-app here. It’s pretty simple to search, only really requiring the ZIP code input. This will not give information such as the recipient’s name, address or anything that would definitely pin-point you as a selected tester. However, it will give you an idea of whether or not Big G has sent any ChromeOS deliciousness to your hometown. It also gives the shipping date and estimated arrival! So, go and seek out answers, fellow Chrome-thusiasts. Good luck to you!

I’m excited. I checked my ZIP code, and where there was previously only one return previously, there are now two! On top of that, one of the shipping dates was when I applied as an individual! AND, I live in a city with a fairly low populous, so I’d hope my chances are fairly favourable! I had the chance to play around with a friend’s CR-48 that he recently received, and it was great! Essentially, it was a netbook with a permanent Chrome browser launched, but I was pretty impressed with the hardware. On and off really quickly. Very responsive trackpad. Decent webcam. I’ll give more details if I get one to tote around for myself!

Are you a geek? A gamer? A trendy kid who knows nerdwear is in? Then you’ve probably seen Busted Tees, Teefury, Threadless and other such geek chic clothing web stores. As I was browsing Busted Tees, I was hit with some awesome nostalgia. The “Make It Rain” tee on Busted Tees is a reference to Legend of Zelda: The Ocarina of Time (more specifically, the Song of Storms located therein.) Very, very awesome shirt, and I hope you guys like it, too! Those sites can provide some quick, cheap holiday gifts. On top of that, Amazon is giving Prime shipping away to students! Prime shipping is Amazon’s preferred, 2-day shipping method. Not all items are Prime-eligible, but if you have a .edu email address and want to save your pretty pennies, go sign up!

Today’s a weird, mostly eclectic day for music. It’s also a day of many graduation ceremonies nationwide. I have a few friends who grabbed their diploma today, and I wanted to wish a huge congratulations to them. Good luck in the future, guys! Make it an even better graduation day by going and seeing TRON: Legacy! Later, everyone. 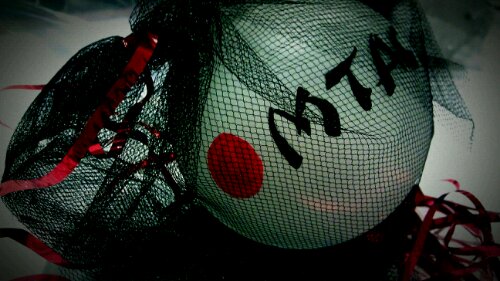 **UPDATE** Are you trying to track your CR-48 shipment? I’m trying to help here! In that post, there’s a section on getting more info on your potential ChromeOS netbook! Good luck to you! 😀

Back to con operations. As we fly toward our next event, it’s time to get back into the heavy work of planning a full-fledged, multi-thousand person convention. MTAC Goes to 11 will be the eleventh running of Middle Tennessee Anime Convention, and it will be my first year on legitimate staff for this particular event. I’ve volunteered for a few years now, and I’ve been on staff for Geek Media Expo (MTAC Organization’s other onset) in the past. For those of you who have never given fandom conventions the time of day, you’re really limiting yourself. I’ll write more about conventions and their glory later on, but those will be for other days. For now, just know that conventions are about seventeen thousand times better than you’d expect them to be and meetings to gear up for them are a sign of great things to come!

Slightly MTAC-related, I put in my application for a CR-48 beta with Google! For those that aren’t aware, CR-48 is a beta for a ChromeOS netbook that Google is busy accepting applicants for and seeding devices out to. On top of my natural Google-geek fascination with the ChromeOS netbook idea, these would be crazy helpful for the convention! In particular, I can’t imagine the difference a fleet of ChromeOS netbooks would make for con PR trips! So, needless to say, I’m excited to hear back about that program. Here’s hoping MTAC gets a few test devices!

Are you using Chrome as your primary browser? Have you discovered the Chrome Web Store for web-applications? If you have the opportunity, give Sketchout a try! Very good demonstration of the potential that full web-app clients have. Let me know what you think! Have a good Saturday, everyone!